This browser is not actively supported anymore. For the best passle experience, we strongly recommend you upgrade your browser.
All Posts Subscribe
February 22, 2021 | 1 minute read

When commenting on Epic's new complaint to the European Commission about Apple last week (here), I noted that we were still waiting to hear the outcome of Epic's application to serve out of the jurisdiction in its claim before the Competition Appeal Tribunal (CAT).

The CAT has just published its judgment.  It found that there was a serious issue to be tried against the US-based Apple and Google defendants with respect to Epic's injunction claims, noting that the potential restrictive effects on competition were apparent (see paragraph 88).  The CAT also suggested that Epic had a good argument that it had suffered significant damage in the jurisdiction such that gateway 9a (tort) would be met.

However, the CAT concluded that England was not the appropriate forum to hear the claim against Apple Inc. In substance, the dispute is between two American companies, with witnesses based in the US, and a pending antitrust suit in the US with many of the same issues of substance.  For the claim against Alphabet Inc. and Google LLC, the CAT reached a different conclusion due to the presence of two Irish anchor defendants (albeit the CAT limited the scope of the claim to the restrictive effects of the relevant developer agreement and Fortnite's removal from the Play Store).

Though the UK claims may continue in some form (although the CAT also noted there was no serious issue to be tried against Apple (UK) Limited), it now seems unlikely that they will play a major role in resolving the global dispute between the parties.

I am far from persuaded that England (or the UK, since the CAT is a UK tribunal) is clearly or distinctly the more appropriate forum. 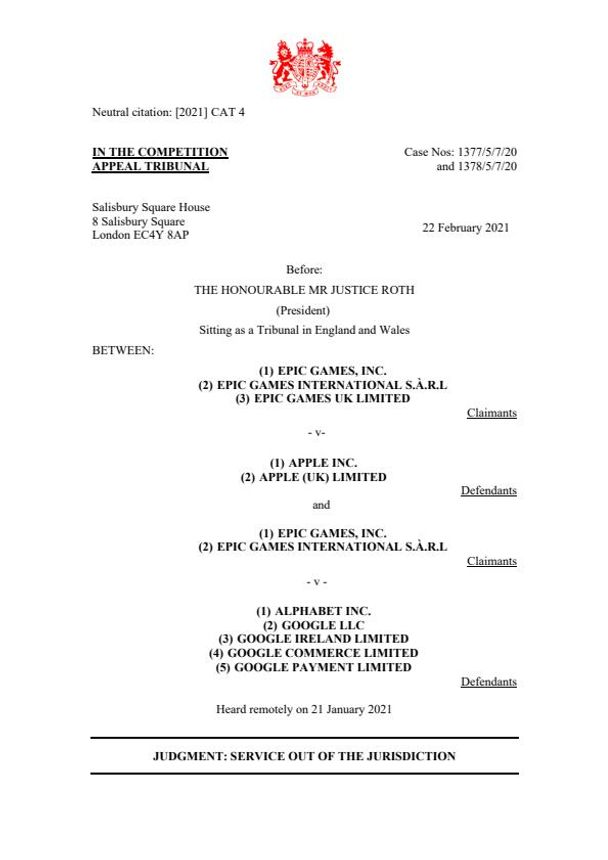