This browser is not actively supported anymore. For the best passle experience, we strongly recommend you upgrade your browser.
All Posts Subscribe
December 17, 2021 | 3 minutes read

Product placement is by no means a new or emerging form of advertising, one only has to think of James Bond and the franchise’s relationship with Aston Martin and Omega as a paradigm example. Back in 2012, Heineken reportedly paid in excess of £20 million to be Bond’s drink of choice in Skyfall.

SPOILER ALERT…. In episode 1 of And Just Like That Carrie Bradshaw’s long-term love interest, Mr Big, dies of a heart attack after riding his Peloton bike.  Days later Peloton’s share price had tumbled by 16%. Not good for Peloton.  A recent New York Times article about the unexpected appearance of Peloton in HBO’s Sex and the City spin off got me thinking about the potential trade mark infringement issues in the UK associated with the use of branded products in film and television generally.

The starting point is that there is a difference between product placement and mere use of a product in a film or TV series.  Product placement is a targeted form of advertising that will usually be governed by a product placement agreement.  That is very different to the simple use or appearance of a branded product in film or television.  Generally speaking, where scenes are filmed featuring branded products or products connected to a particular company or business, the necessary releases and consents will be obtained as a matter of caution.  However, there are and will be occasions when that is not the case.  Such is the pervasive nature of trade marks that the filming of any given scene may involve inadvertent use of a number of trade marks.

The question is whether such use could give rise to claims for UK trade mark infringement.  In theory, yes, but in reality, when a product is used merely as a prop in a film or series, that type of use is unlikely to give rise to a claim for UK trade mark infringement, if it did, it would be almost impossible to use real-life branded products in fictional films and television shows.

A trade mark is not infringed if it is used in a descriptive sense to show products for their intended purpose or to identify goods as those of the proprietor.  Though, any such use must be in accordance with honest commercial practices, so if the use implies any endorsement, sponsorship or other commercial connection to or relationship with a proprietor where none exists, the use will not be in accordance with honest practices.

Likewise, if a product is used in a way that may be detrimental to or might tarnish the reputation of a trade mark, then that use will not be in accordance with honest commercial practices and may give rise to a cause of action under s.10(3) of the Trade Marks Act 1994.  The key is how the product is being used, for example, it would be permissible for Carrie Bradshaw to be filmed wearing a pair of Manolo Blahnik shoes, but if she were to fall and break her ankle because the shoes were supposedly poorly made, that might tarnish the reputation of Manolo Blahnik’s trade marks and give rise to a s.10(3) claim.

The crucial point here is that the use of trade marks in fictional content can have real world consequences.  For film and television producers alike, careful consideration should be given to what products will feature, how they will feature and how much prominence they will be given.  The use of a branded product does not give rise to trade mark concerns per se, but the way in which branded products are used and the impression the use might create, may give rise to potential claims for trade mark infringement.  From a risk perspective, the main way to avoid infringement is to obtain consent and clearances from proprietors.

However, if a scene features numerous products, for example a scene shot in a supermarket or department store, the practicalities of obtaining consents for all of the featured products might prove costly and problematic.  In circumstances where products are performing a peripheral role, the cost and practicalities of obtaining consents may outweigh the infringement risk.  Where a product plays a more prominent role, such as an Aston Martin with flamethrowers, the safer course of action would be to obtain the necessary licences and consents from the trade mark proprietors before using any marks or products bearing the marks.

A Peloton stationary bike played a pivotal role on the new HBO Max “Sex and the City” revival, whose premiere preceded a drop in the company’s stock price on Friday. 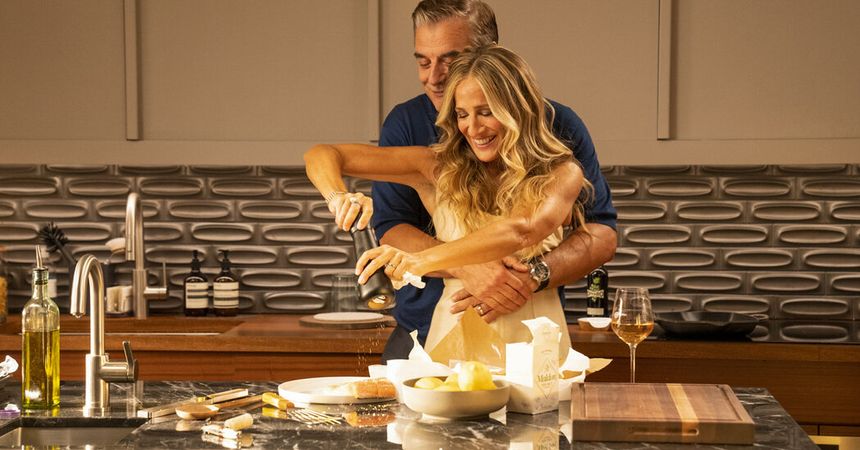